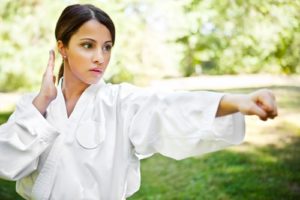 Martial arts have such a wide range of benefits, from increased physical strength to enhanced focus. The pros of learning these crafts are apparent for all ages and genders. However, an increasing number of women are racking up their belts and pursuing what used to be a male-dominated sport.

The Hairpin interviewed Denise Williams, the former head sensei of the Women’s Center Karate Club in New York City. She said that women weren’t typically welcome in the dojo in the 1970s when she began practicing martial arts, inspiring her to join one of the only all-female locations in the city when crime was at an all-time high. In these classes, women learned to defend themselves, as well as trust their instincts when a situation doesn’t seem safe. Here are a few reasons women should consider taking part in martial-arts training:

It’s unfortunate, but it’s true that women have a higher chance of being accosted on the street than men do. According to the International Science Times, old women have the highest likelihood of being robbed, followed by old men, young women, and then young men. this is a large reason that it’s advisable to know how to defend yourself. While there are steps you can take to be a less-vulnerable target, like walking with your head up, being aware of your surroundings and traveling in groups at night when possible, random attacks aren’t always preventable. Even with a basic knowledge of martial arts, you can have an advantage when it comes to fighting off an attacker. While most martial-arts training won’t stand up to a gun or other weapons, you will have a better shot at getting out of hostile situations in which no weapon is present.

It can build confidence

Many people, men and women alike, struggle with a negative image of themselves. However, women typically feel the brunt of this, since society has so many unrealistic expectations of women’s appearances. While martial arts certainly helps you get in shape, that’s far from the only benefit you’ll get from training. Martial arts teaches you to appreciate what your body can do, while also helping you build strength. It’s a healthy practice to get in the habit of, as it it has a positive effect on both your body and mind. You’ll find yourself paying less attention on how your body looks and more attention on all of the new things that you’re accomplishing with it.

Martial arts is always a good choice for people looking to take on a hobby while also wanting to learn a new skill that’ll prove useful in the real world. There isn’t a lot of pressure, either. Unless you’re taking part in martial-arts competitions, your training isn’t competitive, and your classmates and instructors want you to succeed. Everyone helps each other, making it a very accepting and supportive environment for everyone. When you spend enough time at your local martial-arts studio, you’ll get to know a lot of familiar faces, too. It’s very likely that you’ll form a bond with your instructor, classmates and other people who practice at the studio. This is a great place to visit when you’re looking to meet people in a new city. Not only will you form friendships, but you’ll all have each other’s backs!