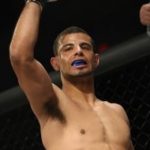 Kicksite has changed our business quite a bit. I can send emails to my whole student group in a snap!

“Hi guys, I’m Brian Davidson and I’m a 6th degree black belt in Taekwondo, I’m in the American Taekwondo Association. I am also a professional mixed martial arts fighter. I fight with Titan Fighting Championships, Bellator, Strikeforce, so I’ve been in a lot of promotions. But I’ve been using Kicksite now, and man I’ll tell you what, Kicksite has changed our business quite a bit. I’m one of those, I write it down but I don’t necessarily follow up. And now Kicksite is, we enter it in and it follows up right there for us, and it has been helping me out in my business quite a bit. So I just wanted to kind of share some of that as far as part of our testimony and why we like Kicksite.

I’ve got two schools. I’ve got an MMA school with fighters, and then we have a traditional Taekwondo school, the ATA school. And we use Kicksite through both of them and we have no issues there. We treat our MMA school just like our traditional school. We track ranks, we track attendances and billing, and we can send invoices. The best part that I like about it is the communication tool. We’re able to send emails out to our whole student group, like a snap. It’s really easy. And before I was trying it one at a time or figure out how to do a group email, and it does that for you, so that’s pretty cool. It can even interact socially through Facebook and all of those with those notifications as well, so that’s pretty cool. And then it’s got a whole promotion feature, testing our students and getting the ranks updated, and it’s all a couple of buttons and then that happens. So Kicksite’s pretty sweet, I recommend you check it out. It’s working great for us here in Kansas City, and good luck to anyone who checks it out! Thank you.”