Everything You Need to Know About Mixed Martial Arts 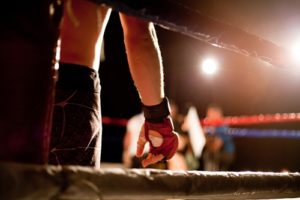 Each time there is a mixed martial arts fight on television, millions of people tune in. Traditional martial arts and boxing is an intriguing combination. It is natural that people are looking into practicing mixed martial arts on their own. They are interested in entering the professional world of MMA or just looking to get fit. Whatever the reason you may want to pursue MMA, here’s what you should know before beginning:

On television, MMA matches may just look like two large people fighting, and in some cases, it truly looks like a free-for-all. However, there are actually very strict rules when you’re competing in MMA. In fact, according to Mirror, there are over 25 official fouls, including head butting, small joint manipulation or unsportsmanlike conduct. While fouls typically lead to a point deduction, the fighter is usually disqualified from the match. In any sport, not being fouled is in the player’s best interest, but this is especially true during MMA matches because the fighters don’t know their scores in the midst of the competition. The judges around the ring score each fighter on aspects such as their strikes and grappling effectiveness.

You’re not too big or small to fight

Though many people train in MMA for fun as opposed to an effort to go professional, some men and women who would like to be pro fighters become discouraged from even pursuing MMA because they’re concerned that they’re too large or too small to fit into any of the weight classes. However, there are eight different weight classes for professional MMA competitions, according to Mirror, ranging from below 125 pounds to 265 pounds. There are likely even more options in your local martial arts studios if they offer the opportunity to compete.

MMA fighter Brad “One Punch” Pickett told The Telegraph that having muscles isn’t necessarily an advantage like it used to be. Being agile and having endurance is actually more beneficial in an MMA match than large muscles. He said this is because the bigger the muscles, the more oxygen a fighter requires – if you’re too muscle bound, you will be tired quicker than your opponent.

“Your adrenaline is pumping during a match.”

There’s no doubt that the fighting aspect of MMA is hard on the body, but not everyone realizes that the training aspect is just as difficult – if not more so – because you do it frequently. There’s so much more to the activity than fighting, and it’s absolutely necessary that your body is in tip-top shape. Most fighters cross train when they’re not practicing their martial art, and many of them even work different styles into their training.

Practicing isn’t the only aspect of making sure your body is ready for your matches, though. You need to ensure to eat a healthy, well-rounded diet and sleep 8 hours each night – not just the night before a fight! If you happen to injure yourself during training or a match, your body needs to have the capabilities necessary to recover quickly and efficiently. Luckily, your adrenaline is pumping during a match so you may not realize how tired or sore you are until after the match!

Saying that MMA is just tough on your body would be an understatement. It’s a mental game just as much as it is a physical one. According to Bodybuilding.com, the mental factors tend to be what burns MMA fighters out quicker than the physical aspects of the sport. Pickett even told The Telegraph that the sport is 90 percent mental and 10 percent physical.

“It’s not easy to do what we do, to step in there when you know someone is going to beat you up” he said. “If you don’t have the right mindset to compete and want to win, you’re not going to do it. And it’s all about positive mental reinforcement. For instance, you might not believe in how dangerous a move is until you pull it off in a live situation.”

Though mixed martial arts classes can seem intimidating at first, the martial arts industry is incredibly welcoming, and you never know how much you’ll like something until you try it! If you think you have what it takes, try enrolling in a class at your local studio.