What you should know about tai chi 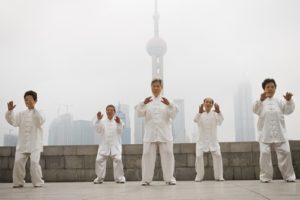 When people think about martial arts, the styles that come to mind tend to be karate, kung fu or even mixed martial arts because those are some of the most popular varieties in the Western world. While these varieties of martial arts tend to focus on fighting and defending yourself, there’s a style that focuses on relaxation and inner calm: tai chi. Here’s what everyone considering learning martial arts should know about this activity:

What is tai chi?

Have you ever seen a group of people in a park doing slow, graceful movements in unison? Chances are, you witnessed a tai chi practice. According to MedicineNet, the art of tai chi dates back as far as 2,500 years to ancient China. In addition to being the root in Chinese medicine, these movements also had aspects of self-defense in mind. These seemingly slow and peaceful bodily movements used internal energy to fend off an attacker. There are three parts to tai chi:

People reference tai chi as “meditation in motion” because of the mental benefits. There are three main styles of tai chi, according to the Tai Chi for Health Institute. These styles are Yang, Wu and Sun. Other varieties may take different aspects from all of these for an entirely new experience.

There are both mental and physical benefits to the practice of tai chi. It puts minimal stress on your muscles and joints. Tai chi is a good choice for older people, individuals recovering from injuries, or people with joint issues. If it’s been a long time since someone has exercised, taking a tai chi class is a great way to get back into the habit of fitness with a limited chance of getting injured. Many people are unsure about how beneficial an exercise that looks so simple could be, but the Mayo Clinic has laid out all of the benefits:

Harvard Medical School also pointed out that even though tai chi has a set range of motions, it can still be adapted for anyone, even if you’re in a wheelchair or recovering from surgery in your leg, shoulder or anywhere else.

The great thing about tai chi is the fact that you can do it on your own or in a class. You’ll have a better chance of reaping the benefits of the activity if you begin an ongoing routine than just taking a class once in a while, or ceasing the activity after your classes have come to an end. One way to learn is to take a class that teaches you the basics of tai chi and then practice at home. You can also take different classes that focus on the different styles to find which one is best for you.