The Origins and Symbolism Behind Martial Arts Belt Colors 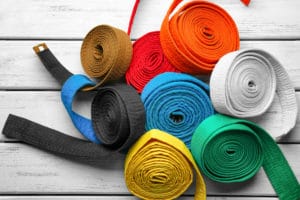 It’s common knowledge that different martial arts belt colors signify “rank” or degree of proficiency in the sport. But, did you know that the belt colors assigned to each rank are significant in themselves? Each color carries a special meaning that is meant to be embraced as a part of the martial arts journey.

While the number of belts and the order of the color progression varies among styles and schools, it’s generally accepted that the martial arts journey begins with white belts and ends with black belts – the highest-ranking level. Each of the colors between beginner and mastery represents a new level of growth and development, and it’s also widely recognized that earning a black belt marks the beginning of another journey.

So, what are the origins of the modern martial arts belt order? What do the colors signify?

The use of colored belts is a relatively new concept – even in the early 19th century, belts were not yet used as a ranking system. Instead, students were only given a “menkyo,” or a certificate that indicated their level of achievement.  The first use of colored belts can be traced back to the 1880s with Dr. Jigoro Kano, the founder of Judo. Originally, Kano used only two colors, white and black – students wore white belts while teachers and masters wore black. Then, the belts were adopted as a ranking system for students and teachers alike; white for beginners and black for experts.

The origin of white and black belts, as well as the origination of colored belts in the 1930s and 40s, is widely agreed upon. From that point forward, though, stories vary as to the reasoning behind the colors used today.

Mikinosuke Kawaishi, a Japanese master of Judo, is often cited as the originator of martial arts belt colors. In 1936, Kawaishi moved from Japan to France to teach Judo and Jiu-Jitsu. He found that while Japanese students were content with the many years it took to progress from white to black belt, students in the Western culture were not as patient. He introduced belt colors to offer students more immediate recognition of their growth, skills, and knowledge as they progressed toward their black belt. The tradition of colored belts then spread quickly to other styles such as Taekwondo and Jiu-Jitsu.

What do the colors of each rank represent? 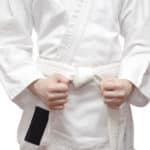 WHITE represents birth, purity, and innocence. Students begin as white belts with a blank slate, ready to begin their journey to knowledge. 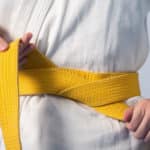 YELLOW represents the sun, its eternal energy, and the first steps of a fruitful journey. When a seed is planted, it slowly begins to reach upwards towards the sun. At this stage, students begin to understand the basic concepts of martial arts and the discipline required to control their bodies. 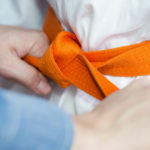 ORANGE is also symbolic of the sun, now having grown in intensity. The orange sun brings continued growth and maturity to the seedling. At this stage, students expand their knowledge of basic blocks, kicks, and punches. 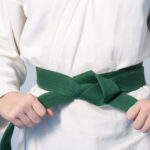 GREEN represents the seed breaking through the ground and beginning to grow. By now, students have a solid foundation of knowledge in martial arts. 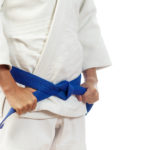 BLUE signifies the sky; as a plant grows, it reaches towards the bright blue sky. At this point in the journey, students have begun to master some of the more difficult techniques of the art. 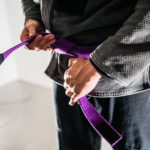 PURPLE is symbolic of the changing colors of the sky at dawn. At this stage, students learn to perfect advanced footwork and can truly set their sights on the black belt achievement. 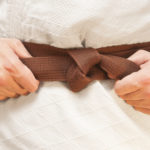 BROWN represents a seed in harvest – students have matured and are ready to be cultivated into something brand new. Just as a farmer harvests his crop, the results of one’s hard work finally pay off and become abundantly clear. 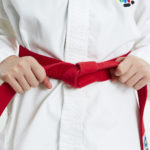 RED is again, symbolic of the sun and its hottest parts. At this point in the journey, a student becomes mindful of how impactful, and even how devastating, their acquired skills can be. They must learn to practice control and discipline in response to any situation. 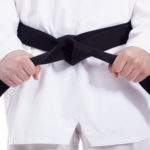 BLACK, as a color, is created when all colors of the light spectrum are totally and completely absorbed. In martial arts, black represents the darkness behind the sun and the new beginning beyond. This idea is symbolic of the learning a student has done throughout the various belt levels and the beginning of their journey as an instructor.

Black belts begin as a first “Dan,” which translates to “first degree.” Much like the journey from white to black belt, students can now begin their quest to achieve a higher “Dan” as a black belt.

Kicksite hopes all students embrace the meaning behind each belt and the challenges at every stage of the martial arts journey. Advancing toward and earning a black belt is no small achievement – it takes practice, dedication, and a great deal of patience.