How Tae Kwon Do Helps Students Dealing with Bullies 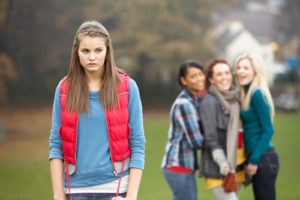 Forty-nine percent of nearly 1,300 of young people between 14-24 who participated in a recent study by MTV and The Associated Press-NORC Center for Public Affairs Research admitted to having experienced digital abuse.

While this number is down seven percentage points from a similar survey in 2011, bullying is still a major problem affection millions of kids and teenagers throughout the country.

Finding ways to deal with abuse from peers is critical for students to be able to get through school. Seventy-two percent said deleting their social network profile made the situation better, while 66 percent saw an improvement after talking about it with their parents. However, it may be a better idea for students to build up their mental strength to prevent bullying before it starts.

No student likes to be bullied and it can often be easier to get in a child’s head if they feel helpless against those who are picking on them. Taking part in some Tae Kwon Do training can fix this problem and give students some confidence to stand up to their bullies.

Here are some tips from the American Tae Kwon Do Association on how martial arts can help to combat bullying:

Part of learning Tae Kwon Do is being able to control one’s mind. This is extremely important when confronting a bully who is trying to instigate a problem. Understanding how to stay calm will not only frustrate a bully, but allow a student to become less of a target.

2. Be as friendly as possible:

Students who take Tae Kwon Do class will find it easy to make friends in class if they come in with the right attitude. It’s important to have the same mindset at school. Students must be open to making new friends, which can greatly reduce the chances they get picked on by a bully.

3. Help others who are facing bullies:

One quick way students can use to show bullies that they are not afraid of them is to stick up for their friends who are being teased. Bullies like to pick on the easy targets, and students who have learned Tae Kwon Do will have more confidence to be able to defend themselves and their friends from anyone.