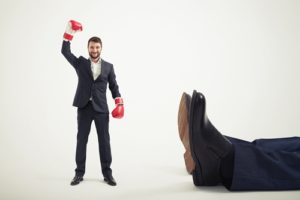 Practicing martial arts can have plenty of positive physical effects on an individual, but so much of the sport’s value is tied to its mental aspect. Athletes who participate in any kind of martial art have to show focus by learning new kata and techniques. As well as discipline should a practitioner find themselves in a confrontation outside of the gym. One of the most intriguing aspects of the forms and disciplines that make up the martial arts is that they teach students a sense of integrity and honesty in action. In fact, one of the biggest pillars of every martial art is to use as a form of self-defense. It is not an excuse to inflict physical harm on someone you don’t like.

Many of these principles extends to other aspects of one’s life, including the business world. In fact, many successful businessmen and women practice martial arts as a healthy form of stress relief and another way to hone the skills they need to be successful in their lines of work.

Here are three of those individuals:

This Swedish real-estate broker has become a somewhat famous figure in the U.S. after featuring on the popular Bravo network television show “Million Dollar Listing New York.” He’s well-known for his immense success and his unique personality in the business world. In fact, he often performs a karate high-kick before he walks into the room. When he was asked why, he pointed out that it was a great way to release stress and mentally prepare himself for a big business meeting.

“The high-kick symbolizes everything I stand for in business, who I am,” he told Entrepreneur. “I’m in a very conservative suit and I’m in a conservative board room environment, high pressure, multi-billion dollar New York real estate world, and at the same time, I high kick right in front of everyone. It says that I don’t take myself too seriously and they shouldn’t either.”

Bardis is the 58-year-old CEO of MedAssets, a healthcare performance improvement company. The business giant teaches wrestlers and mixed martial artists in his free time. He even opened a 120,000-square-foot gym a few blocks away from his business in 1997, according to the Wall Street Journal.

As vice president of Microsoft’s International Research Department, Wing is certainly a busy businesswoman. She an expert in cyber security and earned her fourth-degree black belt in the Korean martial art Tang Soo Do. She even became an instructor down the road.