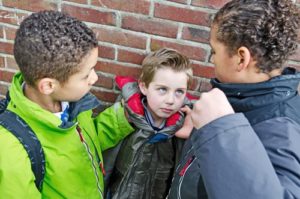 The subject of bullying has recently entered the spotlight all over the country. Kids of all ages tormented in school often see their misery reflected in other, negative aspects in their lives.

“Bullying can have a severe impact on a child’s life with scars that will never heal,” Michael Matsuda, president of the Martial Arts History Museum, told News Media Wire.

Fighting back against bullying

Luckily, there are groups that are fighting back. A newly formed production company that will specialize in making martial arts films called Traditionz Entertainment Inc. released an anti-bullying film entitled “The Martial Arts Kid.” Interestingly enough, the film has roots in the experiences of someone directly involved with the project. Executive producer Maurice Elmalem was a victim to bullies for his cultural identity growing up as a Jewish child in Morocco. Instead of doing nothing about it, he decided to train in martial arts. Now, years later, he is the grand master of multiple martial arts schools. The winner of eight world championships, and holder of seven Guinness World Records. The family friendly movie parallels instances from Elmalem’s life.

“The Martial Arts Kid focuses mostly on bullying and a kid that gets in trouble with his neighbors in Florida and has to move to California and he’s being bullied by other kids,” Elmalem told the Riverdale Press. “He decided to learn martial arts to defend himself.”

The new film features performances by two martial arts experts in Don “The Dragon” Wilson and Cynthia Rothrock. Recognized as the best kick-boxing champion in the world, Wilson created anticipation . And Rothrock is thought to be the best female martial arts competitor of all time. Alongside Jansen Panettiere, Kathryn Newton, T.J. Storm and Chuck Zito, should be more than talented enough to get the anti-bullying message across.

The goal of the filmmakers was to educate audience members about the benefits of learning martial arts. However, they wanted to do so without making the film too violent. The producers wanted to maintain the family friendly nature of martial arts. So hopefully parents will enroll their kids in classes across the country.

“The Martial Arts Kid”, released in New York City and Los Angeles first on September 18, 2015. It followed by a more widespread release to other large markets including Chicago, Texas, Florida and Washington D.C.