Martial arts experts give back to their communities 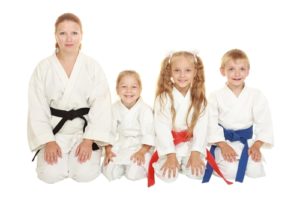 Many people considering taking a self-defense class may think training in karate, taekwondo, jiujitsu or some other discipline is a sure way to win a fight. However, once they begin, it’s not uncommon for individuals to quickly come to the realization that martial arts can encompass so much more.

It is the ancillary benefits of taking a self-defense class that school owners and instructors promote to raise awareness on the benefits of martial arts and get students involved.

Former marines open mixed martial arts gym in Pennsylvania
Service men and women have a full understanding of the nature of combat by simply being in the military. Their training puts them in a position to be experts in the art of self-defense, albeit on a much grander scale.

After completing their military tours of duty, two ex-marines, Paul Tost and Brian Backus – who are also experienced in Brazilian jiujitsu – decided to give back to the community. They joined forces to start an MMA training facility where they could teach students interested in becoming involved in one of the most popular sports in the U.S.

Brazilian jiujitsu is inextricably linked with MMA as many of the top fighters use some form of this martial arts discipline, particularly when it comes to grappling techniques.

“We knew we clearly had a love for the sport, so we just said to each other one day, ‘Man, it’d be really cool if we had our own place,'” Backus told the Indiana Gazette.

“We want the kids to have fun and be engaged in games that have the movements that are needed in Brazilian jiujitsu, but also have the discipline and respect to be able to train in the sport properly,” Tost added.

Norwegian martial arts experts trains students in Texas
Erlend Dresskell began his martial arts training at the age of five while living in Norway. However, after relocating halfway around the world and settling in Texas, Dreskell decided to share his knowledge with children living in his local area of Kingwood. As a result of this desire, the Kingwood Jindokai Karate Club was formed, Our Tribune wrote.

Dreskell has been teaching karate since he was 16 years old and believes that training in this discipline can have a positive impact on the lives of kids after seeing the effects the sport had on his own son.

The benefits of martial arts training are numerous. Both the physical and mental aspects taught to students is something that they can carry with them and benefit from for the rest of their lives. These underscore the value of martial arts as a whole.