Martial Art Styles – Which Is Best for You? 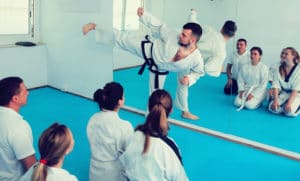 Thinking of taking martial arts but confused on what style is best for you? With almost 200 styles in existence, that’s certainly understandable! While many people ultimately select a school for reasons other than the style of martial arts taught – for example, a friend attends the school, it’s close by, or they like the atmosphere or the facility – having a basic understanding of the different styles will help everyone make the best personal choice.

Kicksite takes a look at some of the most popular styles to help guide you, as well as a few of the more obscure styles that you’ve probably never heard of just for fun! Let’s start with the ones most people are familiar with and give you a little insight into each! (Listed in no particular order.)

Karate, the Japanese word for “empty hands,” originated in Okinawa as a form of self defense when weapons were banned by the rulers of Japan. For many years it was practiced in secret until Gichin Funakoshi, known as the father of karate, adapted it and made it accessible to the people of Japan.

Karate is primarily a striking art that focuses on the use of the hands to attack. Movements are crisp and linear. It also incorporates many elbow and knee strikes. While it includes kicking (kicks are a more secondary form of defense) and striking – more emphasis is given to the use of the hands for striking.

In karate, you will learn pre-arranged sequences of techniques, known as “kata” or forms. In addition to the physical aspects of karate, there are many guiding principles taught, such as respect, courtesy, effort, self-control, and sincerity among others.

Karate was introduced as an Olympic sport for the first time this year.

Taekwondo, which is a single word in Korea where it originated, translates in English to three words – Tae means “foot,” Kwon means “fist” or “hand,” and Do means “the way” or “art.” While there are many similarities to karate, taekwondo heavily emphasizes the use of dynamic (i.e., spinning and jumping) high kicks.

Like karate, you will learn some pre-arranged patterns of defense and attack motions, but in taekwondo these are known as “poomsae” rather than kata. Just like kata in karate, poomsae teaches balance, coordination, and discipline.

Taekwondo places a strong emphasis on not just development of physical skills, but mental and spiritual development as well. There are 5 “tenants” or principles that one is expected to maintain – courtesy, integrity, perseverance, self-control, and indomitable spirit.

Taekwondo was introduced as a medal sport in the 2000 Olympic games.

Kung Fu is a somewhat blanket term used to describe various fighting systems that originated in China. The number of styles in existence today is unknown, but is estimated to be over 300. Some of the more recognizable are Tai Chi, Wing Chun, and Shaolin Kung Fu, each with different historical roots. Translated to English, kung fu literally means “achievement through great effort,” and all styles include aspects of both self-defense and maintaining a healthy lifestyle. Kung fu styles often include a spiritual dimension composed of practicing concentration and self-discipline.

Whereas karate incorporates mostly linear moves, kung fu incorporates more “circular” techniques, especially with the hands, making it appear more graceful and exotic to some than the more straight-forward moves of karate or taekwondo. This is why you will hear some people refer to kung fu as a “soft” style. But make no mistake, the strikes learned in kung fu are every bit as powerful as those learned in karate or taekwondo!

With origins in Japan, jiu-jitsu translates to “gentle art,” which seems to be a misnomer given that this style focuses on throws, chokes, and joint locks! Jiu-jitsu was developed for the Japanese samurai who fought on horseback as a last form of self-defense in the event they were knocked off their horses and lost their weapons. Because they traditionally wore lots of heavy armor, the chokes and joint locks were much easier to perform against an opponent than striking.

In the late 1880s, Jigoro Kango, the father of judo, developed his own form of jiu-jitsu – and modern Judo was born. The main differences between judo and its predecessor jiu-jitsu is that judo is more of a “standing” art, emphasizing throws to the ground to end the fight, whereas jiu-jitsu focuses more on “grappling arts” after both opponents are on the ground.

Brazilian jiu-jitsu was born when one of Jigoro Kango’s students moved to Brazil and among his students were the infamous Gracie family. The Gracie’s, in particular Helio Gracie, experimented with the techniques of jiu-jitsu and made leverage a priority over strength, and thus Brazilian jiu-jitsu (popularly known as BJJ) was born. With the advent of MMA and the Ultimate Fighting Championships (where the BJJ style of fighting is predominate), BJJ has become one of the fastest growing styles of martial arts.

Of course, there are many more very effective and popular styles, including Muay Thai, Krav Maga, and others. But what about some of the more obscure styles? Well, there’s Okichitaw, a unique but very powerful art that incorporates combat moves used by the Plains Cree Indians in Canada. Bokator, coming from Cambodia, is a very complex fighting system, with thousands of different techniques incorporating all parts of the body as weapons. Bando comes to us from Burma, and uses techniques based on animal movements including the cobra, leopard, tiger, and scorpion among others.

With a little research, you will find the style best suited for you and your goals. But whatever style of martial arts you chose, they all share some common benefits. Martial arts training is a great way to get (or stay) in shape, learn self-defense, meet new friends, and have a great time!

Check out our Resources page for additional information on small business finances and follow us on Facebook to be notified about additions to our library for small business owners!