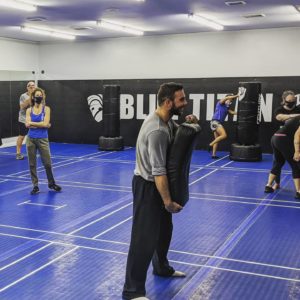 So you want to see improvements in your martial arts school, but you don’t know where to begin? Well, lucky for you, the solution is actually pretty simple – you must position your school in the mind of the consumer.

Before you click away, let us explain! While positioning your school is extremely important, it’s not as daunting as it may sound. After all, it’s not rocket science!

Positioning your school means confronting relevant and widespread issues by providing your business as a solution. It means finding common problems that many in your community are struggling with and using your martial arts school as a way to help people overcome them.

Well, we happen to have the perfect example of what it means to position your school in the mind of your consumer: Meet Eric Basek, the owner of Blue Titan Fitness!

Before we dive into our interview with Eric, let’s cover the basics:

Ok, enough from us. Let’s let Eric do the rest of the talking. Read below to see our email interview with this inspiring school owner.

1.) Help our readers get to know you! What is your professional background?

2.) I know we’re all sick of talking about COVID-19, but how has the pandemic impacted your school?

“I live in a very densely populated state just outside New York City. We were one of the first areas hit and we were hit hard. Because of that there is a pervasive fear, although I suppose you could call it just a very high level of prudence, being exhibited by the residents of the state. Hindsight is 20/20 so it’s hard to say what was the right thing to do for politicians or citizens and I suppose that is neither here nor there but as far as its impact on the gym and in-person client that has been pretty devastating. Fortunately we built an online business and that has kept us driving during these tough times. People need to get their fitness for their mental health as much as for their emotional health and we’ve been blessed to be able to provide that virtually.”

3.) During such difficult times, how do you promote the importance of martial arts?

“We communicate as often and as frequently as possible with our membership through our website, our blog, and our social media platforms, especially our private groups. The best way to lead is by example and so we continue to find ways to train and think outside the box. Whether it is hiking, working out in our living room, meeting up for socially distance 5 K’s or what have you, we find a way to make it work because we know how important it is to ourselves.”

4.) What kind of impact did you notice when positioning your school as more of a personal safety program?

“I think by focusing on self defense we narrowed our audience. This is not necessarily a good thing because people that are interested in sport do not often reach out to us and that is unfortunate because Krav Maga can be very fun and in many respects is very much like a traditional martial art. However those that do reach out to us tend to really, really care about protecting themselves. They either survived some sort of trauma or they work in a very dangerous field and they need a realistic and practical self-defense so they seek us out specifically for that purpose.”

5.) Has there ever been a moment where your students had to practice self defense in a real-life situation? If so, what was that like?

“Unfortunately we have had too many real life encounters to count. Just last month I received a text message from a police officer that I had trained two years earlier in Kansas. He texted me at 3 in the morning saying that an armed suspect charged him with a knife and had he not responded instinctively it is very possible he would have been stabbed to death. Messages like that make it all worth it!”

6.) What are your top 3 tips to marketing your school as a personal safety solution?

“Be authentic. Don’t try to market yourself as a self-defense school if that’s not what you really are. There are many self-defense aspects to traditional martial arts but there is a major difference between teaching somebody Taekwondo and teaching somebody defensive tactics. Students will see through any disingenuous attempts to garner new students interested in self-defense when you’re not actually teaching self-defense.

Share your content. There is no need to hide what you are doing. It is unlikely anything that you are doing is actually revolutionary and it is probably far more likely that a dozen other schools, at least, are already doing something similar. Share your content because you genuinely want people to see it knowing that it might make a difference in their safety. The law of reciprocity is powerful and people who receive free content and see genuine care for personal safety [will] reach out and join. Create value and care about people and the money will follow.

Lead by example. Be sure that you are practicing practical personal Safety Solutions in your own life. Training firearms. Discuss home Safety and Security. Continually develop your own skills by training with other experts and thinking outside the box. Don’t cling to your own set of skills or methodologies preventing you from being open-minded and learning from other people.”

“By being authentic, sharing your content and leading by example, you will begin to create a reputation as somebody who actually gives a damn about personal safety and provides content that will actually work in the real world.”