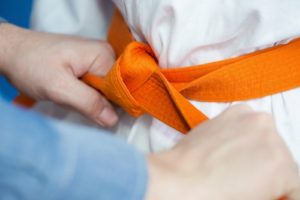 When it comes to martial arts practices in the U.S., one of the most popular and recognized varieties is karate. While everyone seems to know at least one person who has taken a karate class at some point in is or her life, there are a lot of facts about karate that most people aren’t aware of. Here are some interesting things you should know about this popular martial art:

You don’t use weapons

Though you’ve probably seen people performing what you thought was karate with nunchucks or other types of weapons in movies, karate doesn’t use weapons. In fact, according the Tiger Schulmann’s Martial Arts, the name actually comes from a combination of two Japanese words: kara and te. Kara means empty, and te means hand. Rather than focusing on how to use a weapon in practice, people who learn karate focus on katas instead. These are repetitive motions that allow you to smoothly move from one stance to another during combat. This helps build muscle memory and helps you fight more instinctively.

It can help kids with ADHD

Impact ADHD states that karate may be more beneficial for kids with ADHD than team sports for a variety of reasons, including the fact that the practice has a big focus on personal growth. In team sports, kids find themselves comparing their abilities to the others. It can be especially detrimental to children with ADHD, Asperger Syndrome or similar challenges. During karate, or any other form of martial arts, these children not only get to release some of that energy, but they also get to focus on areas like social, emotional and intellectual development in a safe and constructive space.

Karate dates back to the 17th century

According to the History of Fighting, the art of karate can be traced back to the island of Okinawa in Japan. It’s been said that people learned the art of hand-to-hand combat because the samurai leaders placed a ban on weapons. Most of karate’s history wasn’t written down, and information was relayed from generation to generation instead. The earliest written recount of the practice was from the late 1700s. The History of Fighting stated that this writing described a man from China named Kushanku who visited the island and taught a new form of kung fu.

It will be in the summer games

As of August 2016, karate has officially been accepted as an event in the Tokyo 2020 games. According to the Olympic Organization, karate is one of five new sports that will be on the next game’s roster. The other sports include baseball and softball, skateboarding, sports climbing and surfing. This will add 18 new events and 474 new athletes. Karate’s portion of the games will feature both a Kumite and Kata competition. Kumite is all about sparring with an opponent, while kata competitors will be judged based on form.