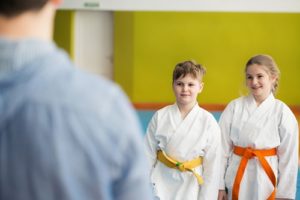 In a perfect world, every martial arts school runs flawlessly as a well-oiled machine, with steadily improving students and happy parents who always pay on time. As we all know, however, nothing is perfect when it comes to running a dojo. Problems seem to creep up around every corner, and we do our best to keep up like a never-ending game of whack-a-mole. Some common mistakes can be easily avoided, though. To make your life a little easier – and your school a more profitable – keep an eye out for these three missteps that a lot of instructors make:

Every class is going to have a bad apple or two – that’s just a fact of life for martial arts instructors. The difference between bad behavior being a minor annoyance and blooming into a full-blown disruption is how you respond to it – and that’s where many teachers go wrong.

Writing for the Martial Arts Teacher Association, respected industry veteran John Graden decried the common myth perpetuated among the community that the best way to deal with unruly students is to ignore them while showering praise upon better-behaved pupils. As he noted, this plan can backfire spectacularly, allowing unchecked bad behavior to blossom and spread.

You also want to avoid trying to make too strong an example out of a troublemaker. Be too forceful, and you risk running them out of your dojo. Instead, address the individual privately. Stay firm, but positive. If things need to be escalated, do so, but be sure that the punishment fits the crime.

The goal of every martial arts school is to bring in as many students as possible, right?

Having more students than your business can handle is a recipe for disaster. Instructors are unable to give individual pupils proper attention, and classes begin to lose any sense of personality. Mike Massie discussed his own experience with a martial arts school that grew faster than he could keep up.

“As my school grew larger, it was nearly impossible to provide individual attention to each and every student,” Massie wrote in Martial Arts Business Daily. “Pretty soon, I found myself filling the role of a human resources manager more than that of a martial arts instructor.”

The downside to all of this, besides the added stress, is that you lose out on a chance to engage students and establish a relationship. As Massie noted, that is a requirement for long-term enrollment. You can have massive classes and all the stress that comes with it, or you can embrace smaller class sizes filled with returning students.

3. Not following up on leads

Responsiveness is the name of the game when nurturing leads and getting parents to pull the trigger on enrolling their kids in your classes. With so many other dojos out there, the competition for interested students is fierce. The difference between the level of success of two nearby martial arts schools could come down to how quickly they follow up with their leads. Despite those circumstances, Massie noted that many instructors drag their feet reaching out to prospective students and pay the price for it. Even the slightest delay could give the competition all the time they need to swoop in.

As long as you’re not overbearing about it, a quick phone call never hurts to test the waters and build on your leads.

Steer clear of these mistakes, and you’ll put your martial arts business in a better position to succeed.