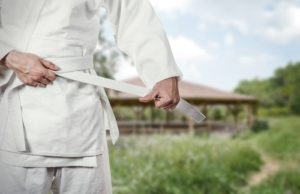 Karate is far from new. Although there is some mystery surrounding it, scholars have a fairly good idea of the influences that shaped the practice known today as karate.

Some historians believe that a Buddhist monk named Bodhidharma is responsible for shaping the practice of many modern martial arts, including karate. As legend has it, Bodhidharma developed the earliest forms of martial arts in an effort to create an activity that exercises both the mind and body. The monk traveled all over the East, spreading his teachings in Zen Buddhism wherever he went. His teachings came about in a Shaolin style of temple boxing, but preserved in the majority of Chinese martial arts.

On the other hand, there are plenty of scholars who doubt that Bodhidharma existed at all. These historians believe the legend of Bodhidharma is a culmination of stories from multiple monks, not an individual man.

Scholars debate exactly how old karate is, but most agree that modern iterations of the sport have origins on the Japanese island of Okinawa. Karate is the Japanese word for “empty hands,” which makes sense given the history in the region. Near the end of the 15th century, there was a weapons ban in Okinawa. Because of that, self-defense strayed away from weaponry and instead landed on fighting with bare hands.

Most contemporary practices of the martial art have roots in Shotokan karate. Gichin Funakoshi created Shotokan in 1938. Funakoshi was born in Okinawa, but is known for helping spread modern karate all over the world. The first dojo he opened was “Shotokan.”

For starters, both katas and kumite make up two of the biggest segments of the practice. The term “kata” equates to the memorization of karate techniques in a particular order. Although they aren’t practiced against an opponent, katas are repetitious in nature, which is fundamental for learning various self-defense techniques. Kumite, on the other hand, is combat against another individual. Otherwise known as sparring, kumite events are often the most popular at karate competitions.