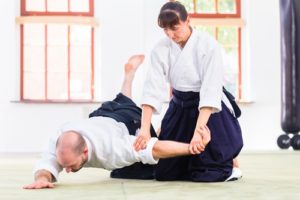 Martial arts are popular practices people of all ages participate in. Whether your child takes part in karate after school or you’ve considered enrolling in a tai chi class yourself, chances are, you know quite a few other people who enjoy participating in martial arts, too. However, there are a lot of myths surrounding these activities that people believe – no matter how ridiculous they may be! We’re here to dispel some of the most common myths about martial arts and people who practice them.

There’s nothing to learn after getting a black belt

While achieving a black belt is certainly a tough feat and an honor, it’s not the furthest you can go in the practice of karate, or any other martial art. Training and practicing karate doesn’t end after getting your black belt. In fact, there are multiple levels of black belts, according to Livestrong. These degrees include nine dan belts, before reaching your tenth. It’s also stated that it can take decades of training before even making it through these levels. But even then, you know everything about Karate. There is always more to learn, and you can enhance the skills you already have.

While many forms of martial arts do teach you valuable lessons in self-defense, other varieties focus more on the physical aspects of the exercise. If learning martial arts solely for the purpose of self-defense, be sure to discuss the teachings with the instructor before committing to the specific class. What’s more, though martial arts can teach you some valuable self-defense skills, they aren’t always foolproof in street fights or other situations in which you may find yourself in serious danger. According to Survivoropedia, most black belts aren’t trained in specific enough areas to be able to take on dangerous opponents, especially if they’re younger and more physically fit than you are. That doesn’t mean there’s no way to win. However, you shouldn’t go looking for trouble because you’ve taken a few martial-arts courses. The best way to protect yourself is to stay out of fights and dangerous situations to begin with.

You can kill someone with one punch

Martial-arts movies is responsible for this myth. In so many of these films, one punch, chop or kick has left the fighter’s opponent dead in the streets, but this isn’t realistic. If it were, how would people be able to practice it in the studio? While a forceful self-defense move can certainly debilitate someone who’s putting you in danger, you don’t have to worry about killing someone with a single kick or punch. This certainly doesn’t mean you should fight people left and right because many moves can seriously injure people. Use your discretion when using your martial-arts skills outside of the studio.